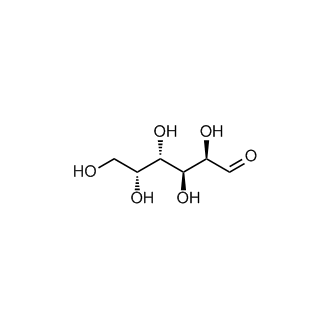 D-Galactose is a natural aldohexose and C-4 epimer of glucose. In Vitro: Galactose is important for the survival and virulence of bacteria. In Escherichia coli galactose is utilized by the Leloir pathway. Two anomers of d-galactose are used for different purposes, α-d-galactose as a carbon source and β-d-galactose for induction of UDP-galactose synthesis for biosynthetic glycosylation[1]. In Vivo: Chronic D-galactose exposure induces neurodegeneration by enhancing caspase-mediated apoptosis and inhibiting neurogenesis and neuron migration in mice, as well as increasing oxidative damage. In addition, D-galactose-induced toxicity in mice is a useful model for studying the mechanisms of neurodegeneration and neuroprotective drugs and agents[2]. D-galactose given by oral route causes cognitive impairments in rats which are accompanied by oxidative damage. Cognitive impairments is observed in the open-field test in the 4th and 6th weeks after d-gal administration, as well as an impairment in spatial memory in the radial maze test after the 6th week of d-gal administration[3].