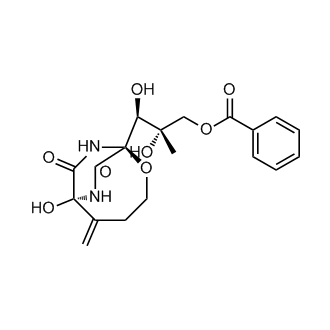 Bicyclomycin benzoate is an antibiotic exhibiting activity against a broad spectrum of Gram-negative bacteria and against the Gram-positive bacterium. In Vitro: The primary action of bicyclomycin is due to interference with the biosynthesis of lipoprotein and its assembly to peptidoglycan in the cell envelope of E. coli. At the lethal level, bicyclomycin is shown to inhibit the synthesis of RNA and protein in the growing cells of E. coli 15 THU[1]. Bicyclomycin targets the rho transcription termination factor in Escherichia coli. Bicyclomycin is a modest rho inhibitor, can disrupt the rho molecular machinery thereby leading to a catastrophic effect caused by the untimely overproduction of proteins not normally expressed constitutively, thus leading to a toxic effect on the cells[2]. The inhibition of rho poly(C)-stimulated hydrolysis of ATP by bicyclomycin has been found to proceed by a non-competitive, reversible pathway with respect to ATP (Ki=20 μM)[3]. In Vivo: Bicyclomycin has low excretion rate after a single intramuscular dose of 50 mg/kg in rats. Bicyclomycin is well distributed in various tissues, and the highest concentration is observed in the kidney at 100 mg/kg[4].