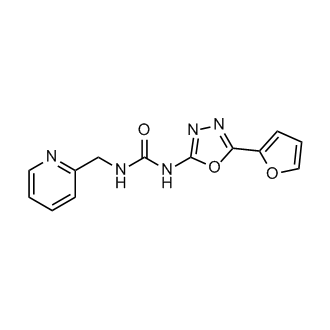 NK-252 is a potential Nrf2 activator, which exhibits a great Nrf2-activating potential. IC50 & Target: Nrf2[1] In Vitro: The luciferase activity in Huh-7.5 cells treated with Oltipraz (OPZ) or NK-252 shows activation of the NAD(P)H quinone oxidoreductase 1 (NQO1)-ARE in a dose-dependent manner. NK-252 displays this effect with higher potency than OPZ based on the fact that the EC2 value (concentration for a 2-fold induction above background), calculated with linear extrapolation from the values above and below the induction threshold, is 20.8 μM for OPZ and 1.36 μM for NK-252. NK-252 has potential as an Nrf2 activator in hepatic cells. Prototypical Nrf2 activators that include OPZ have been reported to protect microglial cells from H2O2-induced cytotoxicity. The protective effects of OPZ and NK-252 are examined against H2O2-induced cytotoxicity using Huh-7 cells to evaluate their antioxidant properties. The cells treated with OPZ or NK-252 show increased resistance to H2O2-induced cytotoxicity compared with control cells[1]. In Vivo: Rats on a choline-deficient L-amino acid–defined (CDAA) diet given OPZ or NK-252 display decreased fibrosis scores compared with CDAA control rats, with median scores of 3, corresponding to bridging fibrosis. CDAA control rats display approximately 20-fold augmentation of the liver fibrosis area compared with rats fed a normal control diet (naive) (14.7 and 0.72%, respectively).This augmentation is also drastically reduced by administration of OPZ or NK-252 (5.80% for OPZ, 6.20% for NK-252_low, and 4.97% for NK-252_high). The effects of NK-252 on both fibrosis score and fibrosis area are dose-dependent[1]. NK-252 alone has no antitumour effect in P388/S- and P388/VCR-mice. The combination therapy of Etoposide with NK-252 administered p.o. significantly increases the life-span of mice inoculated i.p. with P388/S compared with the corresponding therapeutic effects with Etoposide alone. The combination therapy with Etoposide and NK-252 significantly increases the life-span of mice inoculated i.p. with P388/VCR compared with the corresponding survival time with Etoposide alone[2].