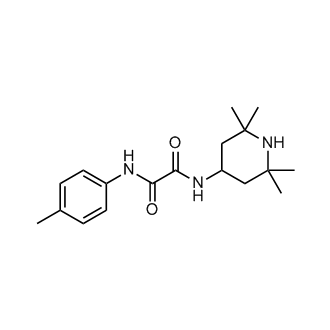 YYA-021 is a small-molecule CD4 mimic that inhibits HIV entry, with high anti-HIV activity and low cytotoxicity. IC50 value: 8.4 μM Target: HIV IC50 (=8.4 μM) value of YYA-021 is determined by a single round assay using cYTA48P virus and TZM-bl cells. YYA-021 is broadly distributed in tissues, probably as a result of its hydrophobicity. The plasma concentrations of YYA-021 in both species remained at micromolar levels for several hours post-injection. [1] YYA-021 also enhances the neutralizing activity of KD-247 against simian-human immunodeficiency virus (SHIV)-KS661 strain via highly synergistic interactions. YYA-021 might have promise as a lead compound for the intravenous administration in a cocktail therapy with anti-gp120 monoclonal antibodies such as KD-247 and with co-receptor antagonists such as T140. [2]